Hamad AlOtaibi, the author of “Controversy Novel” sent me an email to tell me that he just released his book in the market. 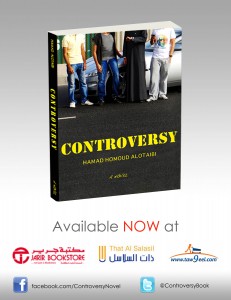 Its a young-adult novel written by a young kuwaiti writer that captures the twisted drama between four close friends. Get the book and let the CONTROVERSY begin!

Synopsis: Mohammed, Abdullah, Khalid, and Youssef are four best friends living different lifestyles, while chasing their long-life dreams. When the spotlight that was focused on one of them has been given to another on a silver platter something went wildly wrong. Something unexpected happened. A scandal has been well planned, the damage was severe, and it reached the point of no return. How can these guys deal with it? Are they strong enough to defeat it? Something we are al going to know.

The book is now available for sale at Jarir Bookstore, That Al Salasil, and Tw9eel!

This entry was posted in General and tagged Books. Bookmark the permalink.