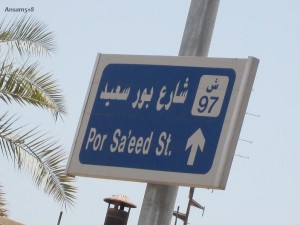 I know some of you might think I’m splitting hairs… but really it bugs me when I see such mistakes! No matter how small or big, I do care! Yes, I’m a perfectionist 😛

It should read “Port” Sa’eed not “Por” Sa’eed! I mean the Arabic pronunciation is Bur Sa’eed (بورسعيد‎)… Influenced by the French, the last letter in words usually is silent…. Plus, in Arabic there is no “P”! That’s why it is pronounced Bur instead of Port! So I dont really know where the “Por” is coming from!

This entry was posted in General and tagged Kuwait, Problem, Question, Signs. Bookmark the permalink.

5 Responses to Por or Port Sa’eed?