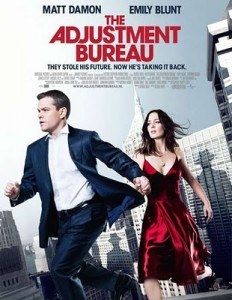 Every Friday after our family lunch, we play a movie – It became our regular Friday matinee movie time. Last Friday we watched The Adjustment Bureau – Starring Matt Damon and Emily Blunt

The movie is about David Norris (Damon), an ambitious politician who is thriving to win a seat in the US Senate. The campaign is not doing so well, when out of nowhere he meets this woman, Elise (Blunt), hiding in a bathroom of the hotel where he is supposed to give his concession speech on election night. Their conversation ends with a kiss, which inspires Norris to give THE speech that helps him gain popularity!

Few months later when Norris gets on a bus to go to work, this random guy looks ticked-off and started running after him as he received an “assignment” from his boss to prevent Norris from getting on that bus with a cool interactive notebook, but he was a little bit too late! Norris meets Elise again on the bus… this time he takes her phone number! 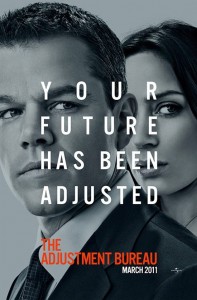 Despite how much the two are drawn into each other, those men’s assignment – from the “Adjustment Bureau” – is to keep the two apart because “its not meant to be”! 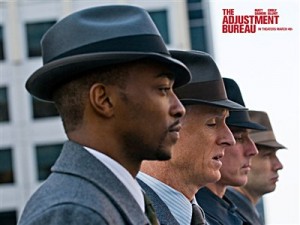 With all the chaos going on, Norris must decide, whether he wants to be with her or just let her go and accept his predetermined path with them…. If he goes with the latter that means he will have to let her go and never speak about the bureau, otherwise they will “reset him”! But he follows his heart instead and risk it all just to be with her! He gets insider help from the bureau and borrows a heat that let him open doors to different gateways! He finally defeats them and win! Man free will kinda situation

The story is an adaptation of Adjustment Team for Philip K. Dick. I wanna read it now!!

I really enjoyed the movie 🙂 A romantic thriller with Sci-Fi made up for half of my likeness to the movie! The chemistry between Damon and Blunt was great! All in all, I can sum up the movie in one-liner: A bureau that work on fixing your life because its destined for certain path and the way you go with or against it! Its not the best movie of the season, but I surely enjoyed it!

This entry was posted in REVIEWS and tagged Movies, Review. Bookmark the permalink.

2 Responses to Review: The Adjustment Bureau