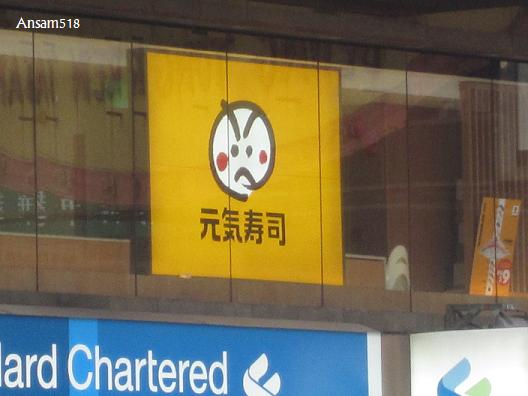 Mimmi and I spotted Genki Sushi -one of our favorite sushi joints- near our hotel in Admirality while in Hong Kong last December! We decided to have dinner there after a long day of shopping and walking around… it was a walking distance from our hotel! We were starving!! 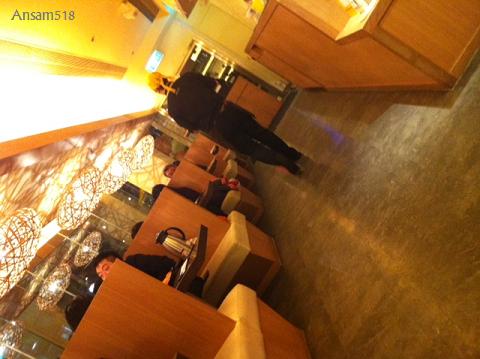 When we got there, the place was almost full… so we had to wait a bit to get a table! We didnt mind. We asked them for menus to browse through while waiting! Unlike the menu in Kuwait -which looks like a book, the menu was much smaller and with lots of pictures – different items too

The way you order sushi was exactly the same way it used to be when Genki first opened in Kuwait – ticking out your orders and handing them to the waiter. Our waiter was nice enough to help us with it since it was in Chinese mostly 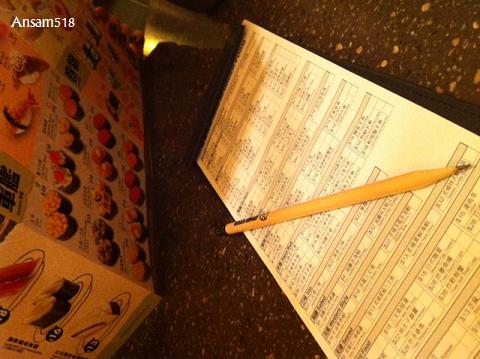 One thing I liked is their branded items… the tissues, the pencil used… 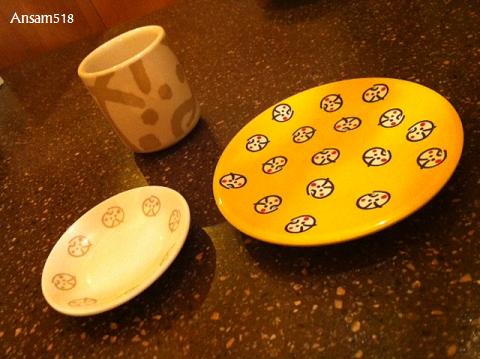 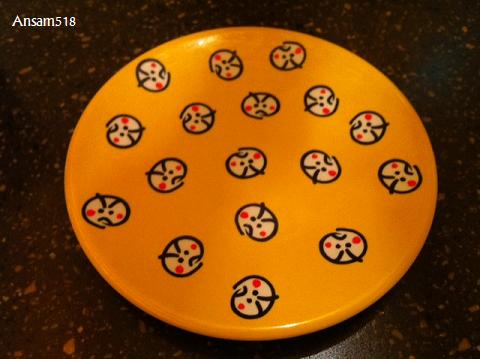 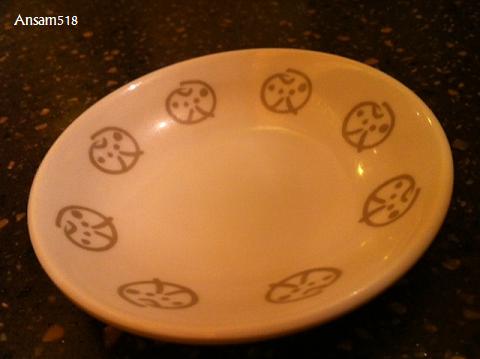 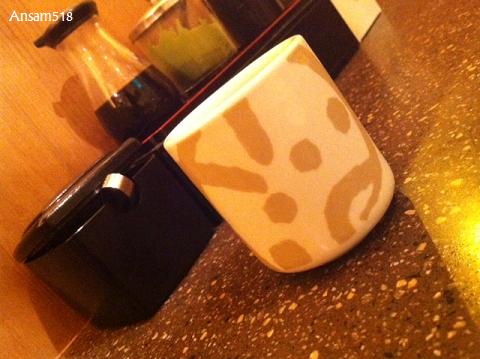 There is also hot water at every table, but we didnt find green tea teabags! The waiter showed us something like green tea powder – not very appetizing, but its nice to have a tea pot around to refill – only if you like it made with green tea powder I mean 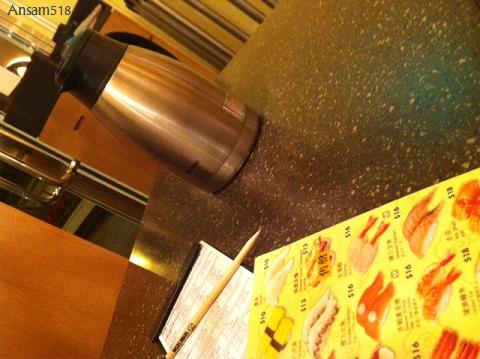 It was around 8:52PM when we placed our orders… the receipt is kept at our table, whenever a dish is served, the waiter tick-it-off 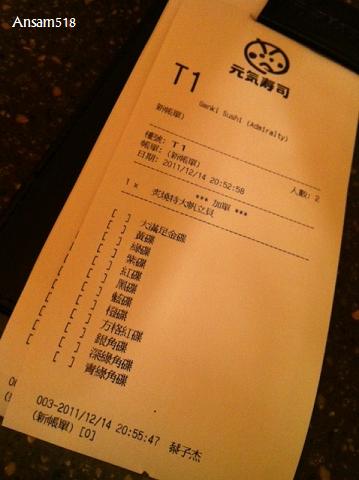 After around 10 minutes of waiting, we got our first order; Salmon Nigiri! Salmon was fresh and buttery in texture! 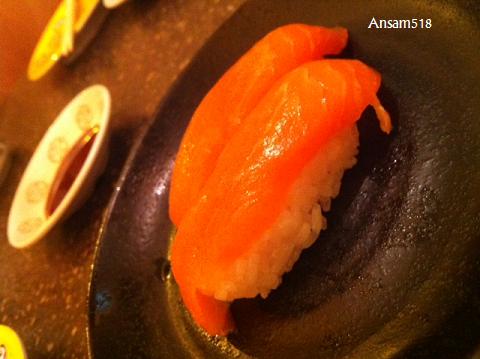 After another five minutes… Shrimp Tempura Nigiri was served. It was a bit heavy and a bit too crispy on the outside, but we didnt mind it at all 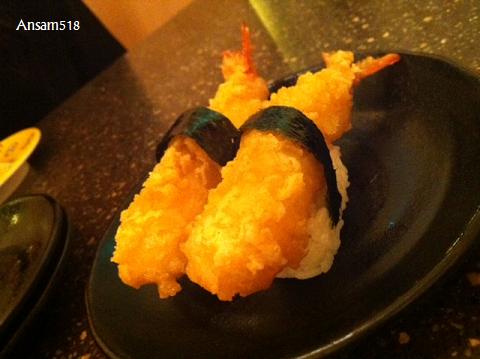 Soon after, we received our seared scallops! The presentation was sad, and they were not perfectly seared, but tasted good nevertheless 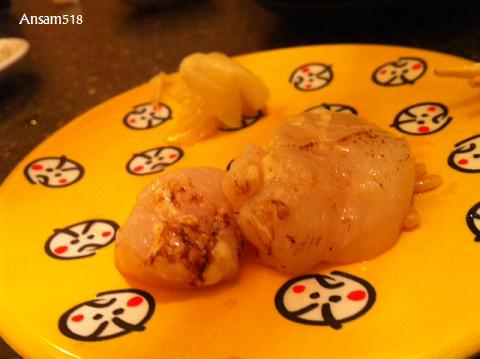 It was around 9:10PM now and we were waiting for the rest of the orders to come… the thing is, our waiter wouldn’t make eye contact with us – and thus we felt a bit neglected. The time was 9:20PM and we were starving! At last he saw us and said he will check on the rest of the orders… at around 9:25PM our salads came – not a fan of cucumber, but I must admit this is a very light version of the kani salads served in Kuwait! The dressing was so light but still good – cucumbers overpowered the taste of kani (crab) 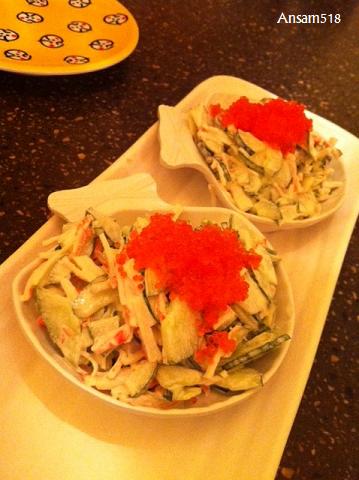 After he came to take the dirty plates we asked him to check on the order, he said “okay”! After that we were totally ignored… we had like six more sushi/sashimi/and nigiri orders to come + edamame! The time neared 9:45PM – the waiter is totally ignoring us – even though he said he will check with the kitchen a couple of times! We were furious we wanted to leave – At around 10:10PM I kind of had to stand up for him to notice us before he came 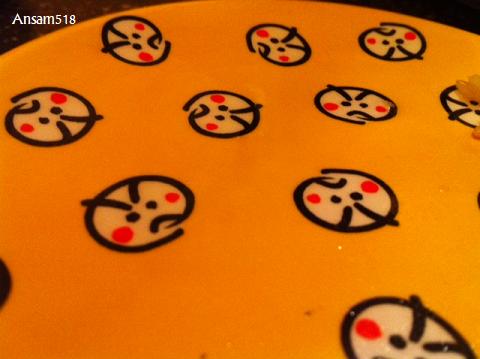 We had the GENKI face on! We asked him to cancel all of the remaining orders and guess what? He said “okay”, took out his calculator, wrote HKD132 on the receipt, and handed it to us 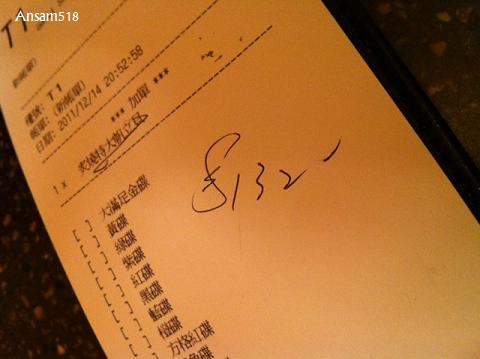 Which is around KWD5 (if not less) – although the price of what we already ordered was really cheap, we hated the service and how bad they handled the problem! Its nothing compared to the service at Genki Sushi Kuwait! The food was fresh, yes I know… taste-wise? It wasnt bad at all… but the dishes served are spaced out with time and the service was way bad! Genki Sushi Admirality…. never again 🙁 *Genki Face*