I saw this video on my friend, Leila’s, Facebook page and thought of sharing it with you 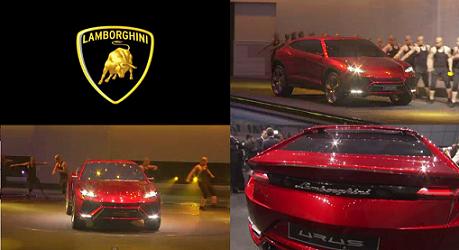 Lamborghini has revealed its new concept Urus 4×4 at the Beijing Motor show – and it’s a million miles away from its famed line of sports cars.

The Lamborghini Urus is an all terrain SUV with 600bhp under the bonnet, giving it a top speed of 180mph. It is a drastic departure from the two models the Italian car-maker currently has in production, as both the Aventador and Gallardo are traditional sporting Lamborghinis.
To buy one will set you back though – it’s rumoured the price will be close to £150,000 by the time it goes through to production in 2016

The model is a successor to the hulking Lamborghini LM002. Urus’ bigger and older brother was somewhat affectionately nicknamed the ‘Rambo Lambo’ due to its enormous size when it first rolled off the production line in 1986.

The Urus has a racing red exterior and measures in at 5.4 feet tall, 6.5 feet wide, and 16.4 feet long. Inside, the Urus is finished with a carbon fiber reinforced polymer, giving it a lightweight and futuristic look.

“The Urus is a very concrete idea for the future of Lamborghini – as a third model line and as the perfect complement to our super sports cars,” said Lamborghini CEO Stephan Winkelmann. “SUVs stand for freedom and emotion. SUVs make up one of the most successful market segments worldwide. The Urus is the most extreme interpretation of the SUV idea; it is the Lamborghini of the SUVs.”

Lamborghini’s second SUV comes as purchases of high-end 4x4s have boomed in recent years. Models like the Range Rover Evoque (which has just undergone a chiche makeover using Victoria Beckham’s design ideas) and the Porsche Cayenne are also set to be joined by the Bentley EXP 9F, an SUV concept unveiled in Beijing very much in the same vein as the Lamborghini Urus

This entry was posted in General and tagged Cars, YouTube. Bookmark the permalink.