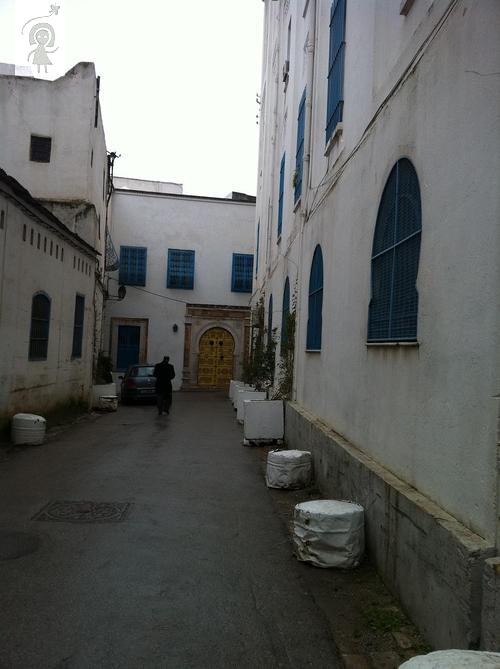 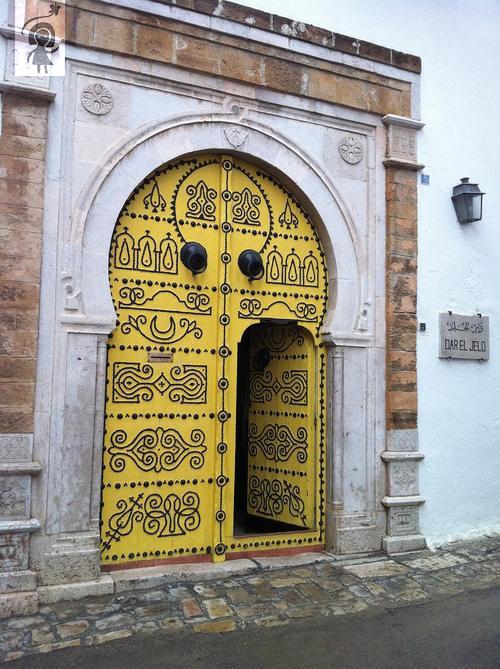 I was told about this place by a couple of people – Um3azoz was one of them – so I made sure to stop by while in Tunis last March. We were 11 persons and we all went together for lunch. The place was dimmed lit, with a historical feel to it. It was an administrative department during the reign of Beys controlling the State leather trust and providing luxurious goods, mainly to the royal court. Today it is an exquisite restaurant serving delicate Tunisian dishes. Let me take you into a virtual tour inside the restaurant 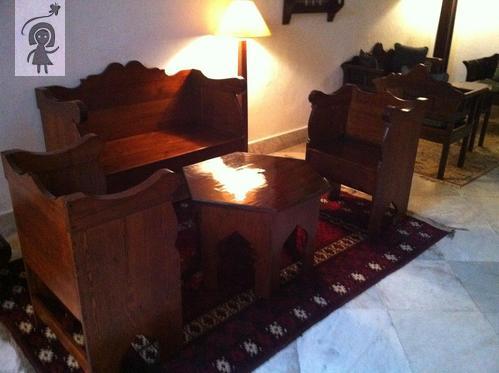 The entrance/reception area above… restaurant itself below 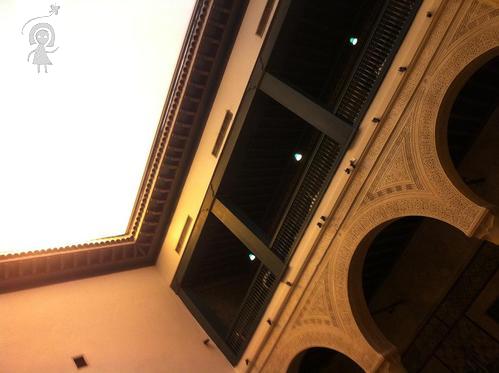 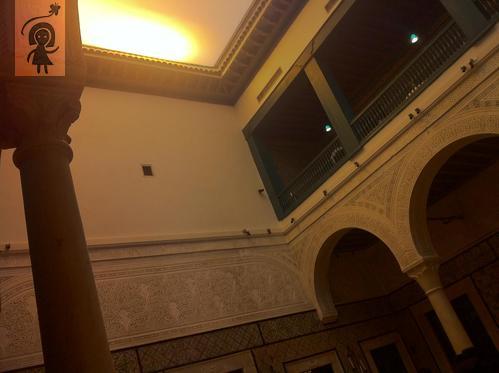 Some walls were covered in ceramic tiles, with beautiful arches, chandeliers – we dined in the area in which seemed to be a courtyard (now covered). 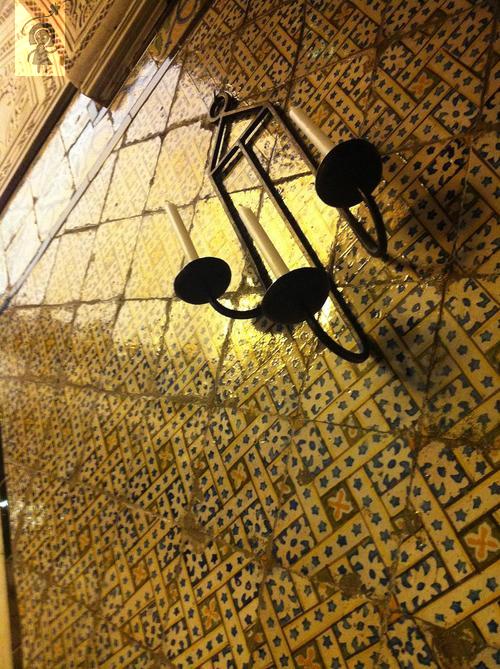 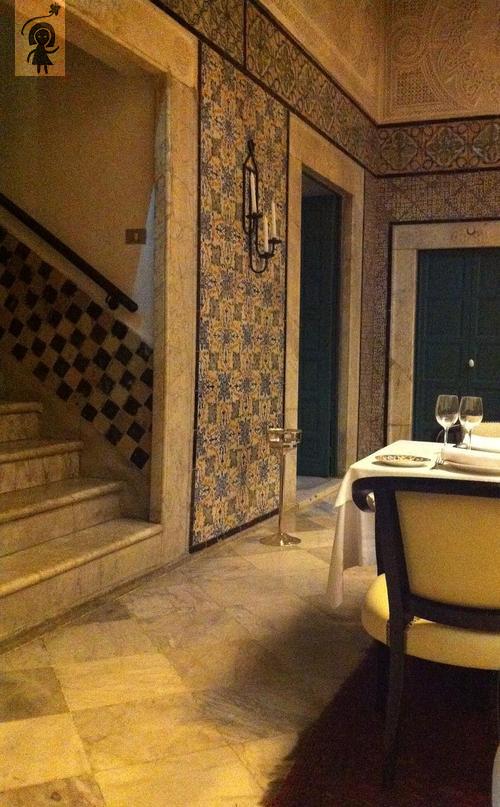 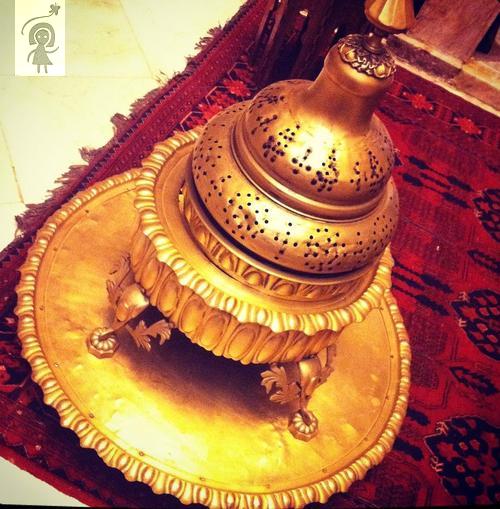 And here it is zoomed-out (as much as I could) 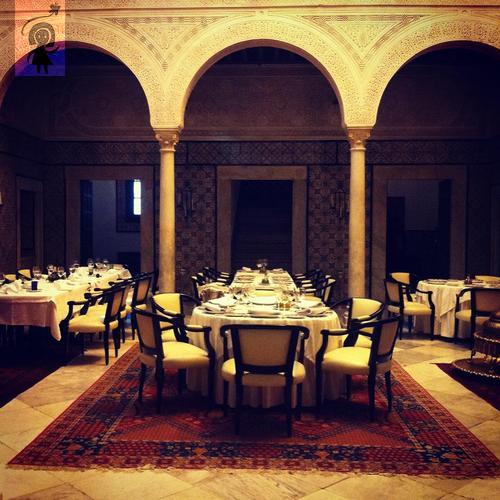 Now let’s talk about food…. shall we? 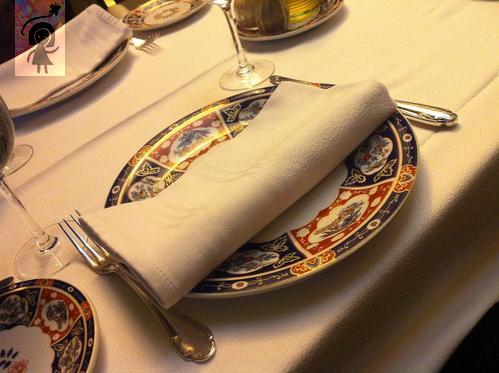 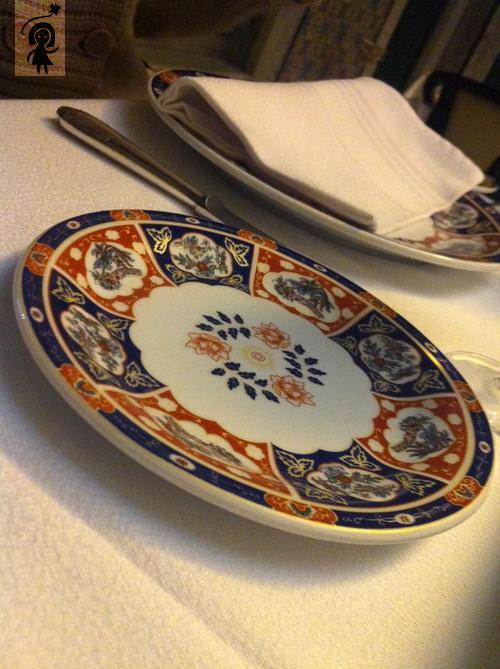 Like most restaurants in Tunisia, there is almost always a bottle of olive oil on the table… it can be added to many of their dishes (I loved that) 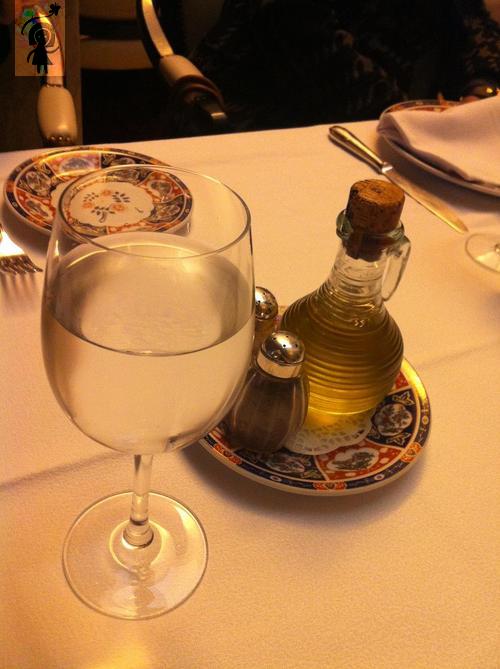 As I said, we were 11 and I did not know most of them all that well for me to bother them and ask them to take pictures of their food… so I do have a few of my sisters and I dishes 😉 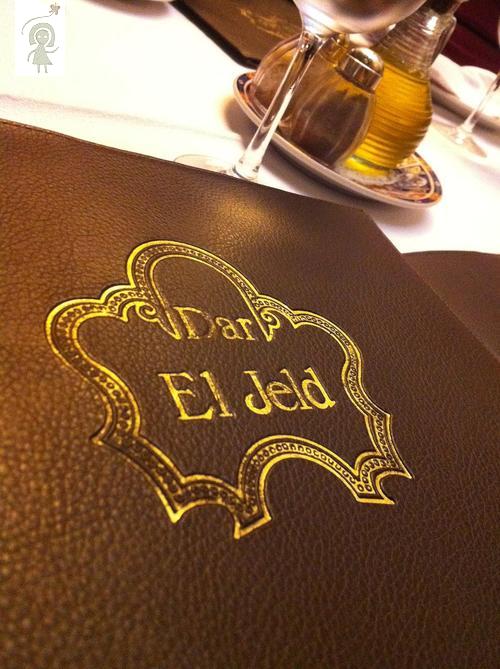 After placing our orders, we were served two fresh buns each…

And as I mentioned before in previous post(s) and upcoming ones, tuna is essential before serving food… it is just like how we are served bread and butter in most restaurants in Kuwait before our meals, tuna is always served – usually with olives and harrissa (their spicy tomato paste) 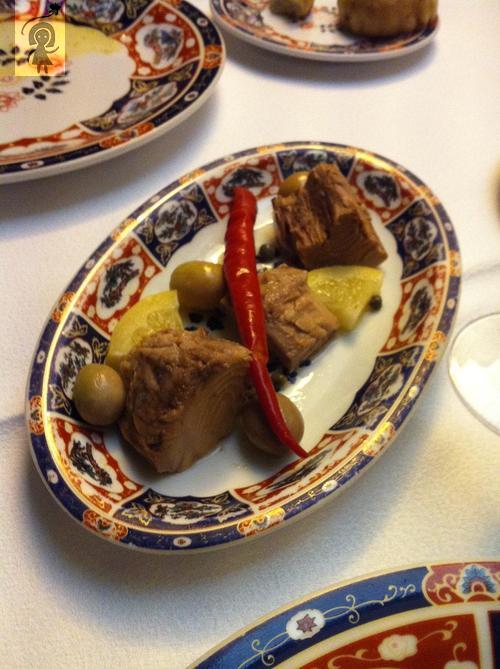 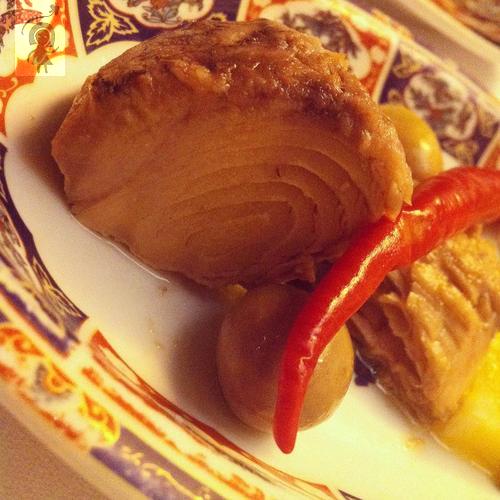 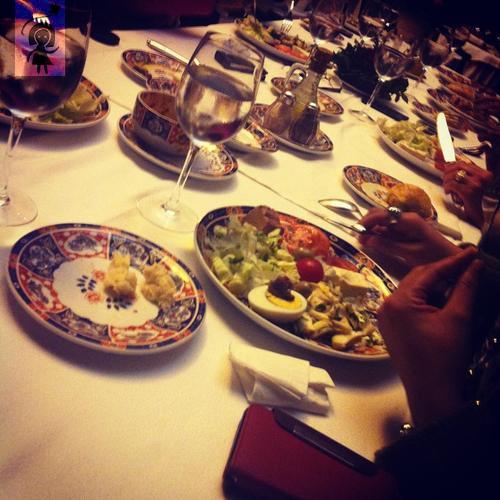 Fulla ordered grilled veggies salad (it is actually mashed grilled veggies, and served cold) it came in with tuna and hard boiled eggs with a chili relaxing on top of it with a couple of olives… not my thing really, being me… I just tried it for the sake of being brave to try new ethnic food – did not like it 🙁 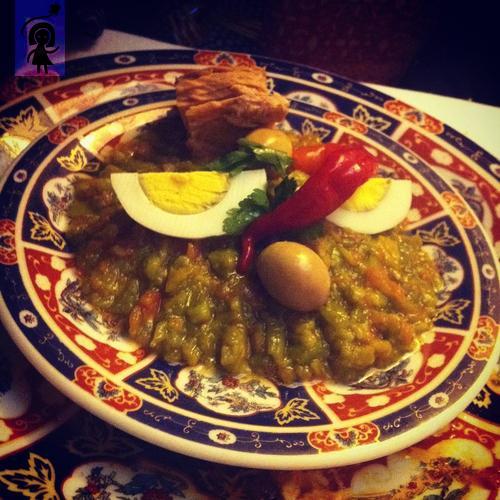 Fulla also ordered fish with olives and capers dish (I think its called kabkabou)… it was a winner 😉 I tried a bite of her order and it was succulent; fleshy, buttery in texture, and juicy! It was amazing 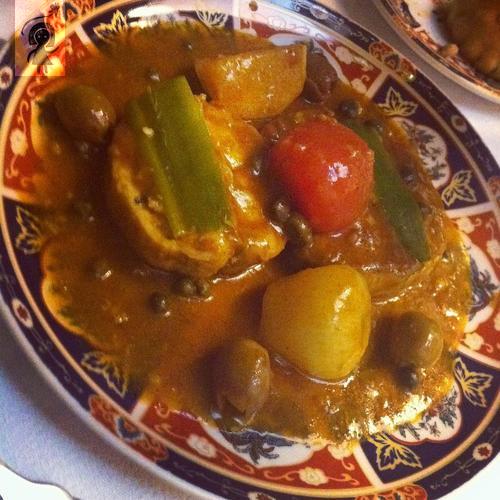 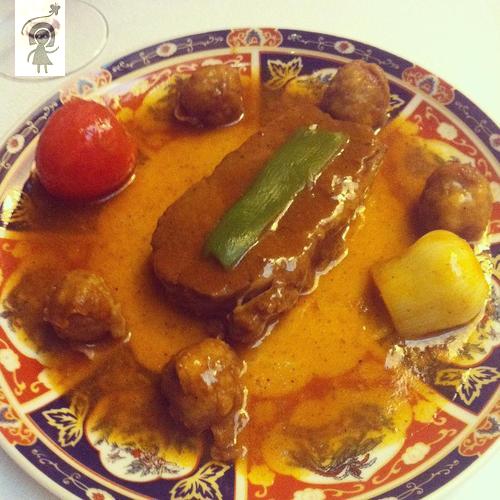 My order was not a winner to be honest – it was Tajine (Tunisian tajine is different than the Moroccan one, and it is similar to quiches minus the crust) – It was okay, not too heavy but not a winner 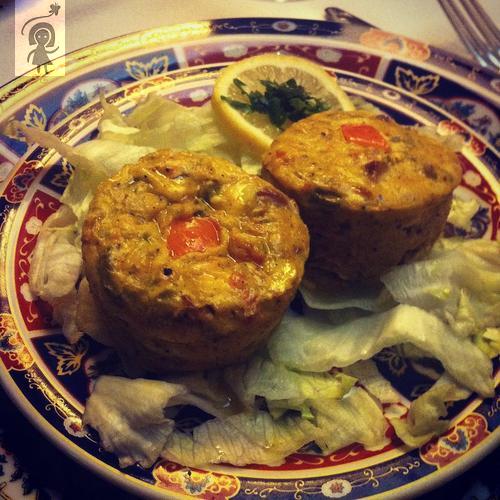 I must say that the service was good, considering we were 11 persons with lots of demands and special requests… I dont know about the rest, but I think they handled everything really well. They were so friendly with us sitting at one end of the table… suggesting dishes, and explaining’em as much as they could… then it was time for desserts and we wanted to try some traditional sweets 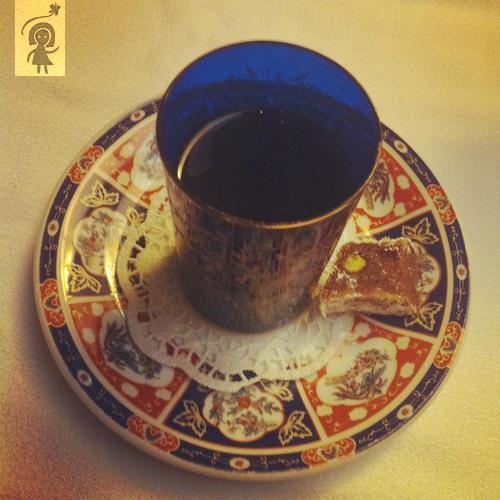 We tried pine nuts tea (شاي بالبندق) – very nutty in flavor – I liked that.. with some fresh mint leaves, the aroma was as good as the taste 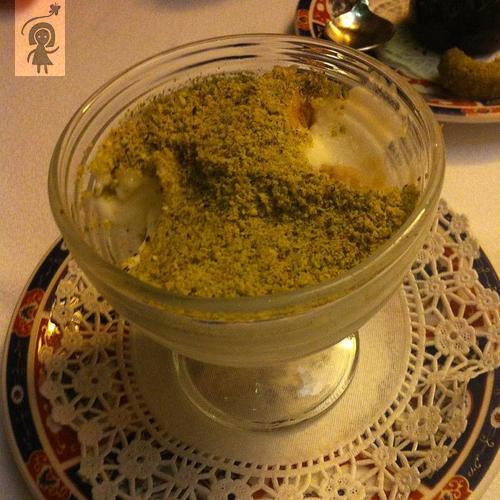 A custard (sorry for the two scoops off, thanks to Fulla & Mimmi who couldn’t wait for my picture 😛 LOL) it was decent… and some sort of pastries called Sowaibeea – for tiny fingers (صويبيع) 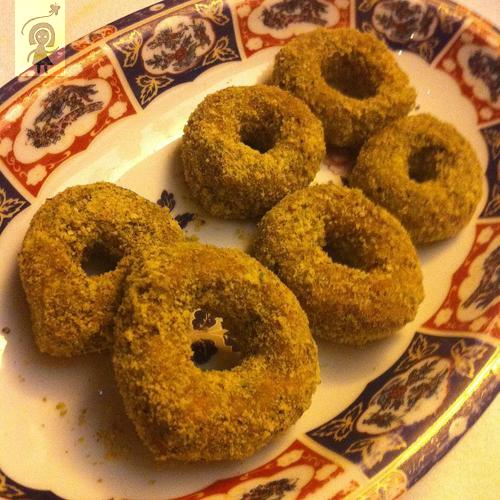 Not bad, and it was recommended by our waiter… they’re small by the way 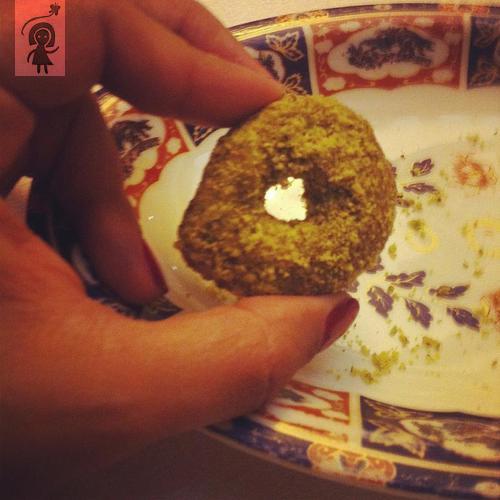 If in Tunis, you must drop by this restaurant…. at least for a cup of tea, just to enjoy the atmosphere – but I do recommend that you give their food a try 😉 I heard from the others with us that their Allouch (koskos with meat and veggies) is really good