As I was surfing the net I came across this article of 10 jaw dropping swimming pools around the world! There is a design for every taste, and a feeling to each one of them! Whether you like it classical, historical, natural, modern, or private… I specially liked the ones in Hong Kong, Singapore, Hawaii, Bali, and Phuket!

This is simply the biggest hotel swimming pool in the continental United States. The stats: 23,000 square feet. 700,000 gallons of water. This Mediterranean-style hotel and its massive, colonnaded pool date from 1926, but the experience of being there makes guests of many ages feel nostalgic for giddy, Jazz Age excess. In case you missed the point of just how ambitious a swimming pool can be, six imposing Roman-style statues stand guard at the water’s edge to appraise your backstroke. The 10 private cabanas, set within poolside gardens and outfitted with teak-wood chaises and outdoor rain showers, are for emperors in training.

Not for those with vertigo issues, this indoor infinity pool is located near the top of the city’s tallest building—the International Commerce Center. The 118th floor, to be exact. The ICC is also the fourth-tallest building in the world, and because it’s located in Kowloon, lap-swimming guests can enjoy skyline views of Hong Kong’s main island and the red-sailed junks of Victoria Harbor. But if you need more visual inspiration, the ceiling above the pool projects videos on 144 LED screens that show different images at different times of the day. 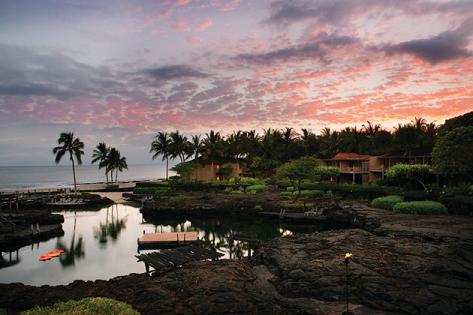 The most luxurious resort on Hawaii’s Big Island has a free-form family pool, a chic adult pool, a lap pool at the spa, and a hedonistic new pool with a swim-up bar and shaved ice on offer. But the resort’s most unusual place to swim is certainly the King’s Pond, a 1.8-million gallon open-air “aquarium” carved out of the natural lava rock and stocked with more than 3,000 tropical fish from 75-plus species. Spy parrotfish, feed a spotted eagle ray, or just watch the show from under a thatched-roof canopy in this quasi-natural environment where fresh water and seawater ebb and flow with the tide. 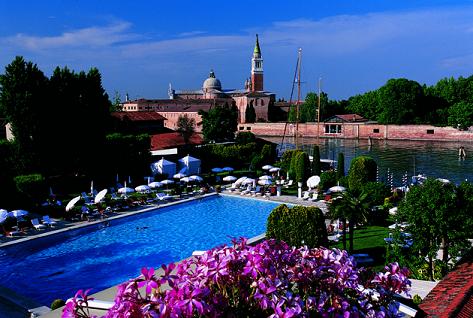 Size does matter: a 105-foot-long pool would be impressive anywhere, but in famously dense Venice, the Cipriani’s Olympic-sized splash will strike you as chimeric. The resort is located on the tip of the quiet island of Giudecca—a four-minute private boat ride from the tourist throngs and frenzy of San Marcos. It’s close to the signature sights of the city, but not too close: The pool is positioned to maximize the campanile views, yet is lined with potted plants and surrounded by grassy lawns that bring to mind a slow-paced country estate. Dine poolside during July’s Redentore festival—fireworks and all—for an unforgettable (and comparatively private) experience. 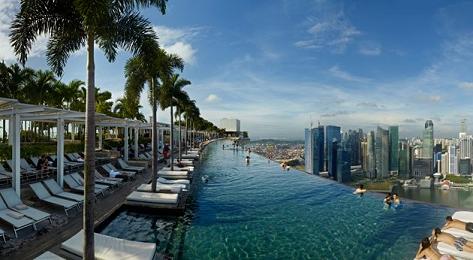 This ultra-ambitious hotel, built on reclaimed land across from the center of Singapore, contains over 2,500 rooms. That’s a lot of guests. Its pool is 15,026 square feet. That’s a lot of pool. Okay, it’s a little Vegas. But when you’re dealing with architecture this whimsically modern, who cares? The hotel’s pool, arguably the world’s most inspired (and world’s largest pool at its height), rests within the Sands SkyPark, a lushly landscaped entertainment expanse that rises above the hotel’s three sleek 55-story towers. This three-section boomerang-shaped waterworld features half-sunken loungers and a dramatic vanishing edge. Bars, restaurants, and whirlpools will keep you there all day.

The revered Aman chain is justifiably known for the beauty of its pools, but the beachfront Amankila resort sets the bar especially high. With only 34 suites, Amankila boasts four pools: even at full occupancy, that’s a pool for every 17 people (although six of these suites have pools of their own—and those guests aren’t going anywhere!). The nearly 135-foot Beach Club pool, which rests within a coconut grove beside Lombok Strait, is a destination unto itself, but it’s the main pool that’s the showstopper: three tiers of blue-tiled heaven flow into one another and are flanked by coveted bales—covered cabanas with jumbo-sized daybeds inside. 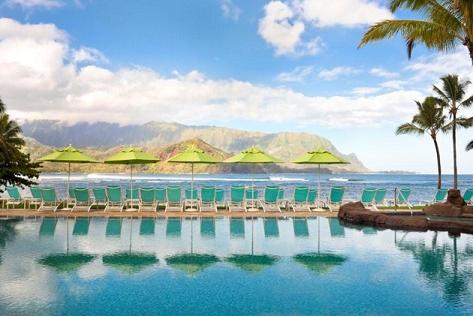 When this star of the Starwood hotel group unveiled its new look—and new St. Regis branding—three years ago, the 5,000-square-foot beachside infinity pool was refreshed. But one thing that didn’t change was its spectacular view of Hanalei Bay and the north shore’s waterfall-laced mountain range. Yes, that’s Makana Peak (aka the mystical Bali Hai from South Pacific) in the distance. The poolside services equal the setting: enjoy complimentary pineapple spears, chilled towels, and Lemongrass Foot Treatments at the poolside Halele’a Spa. Consider a splurge for the one-of-a-kind Trina Turk cabana. Best of all: the pool is open 24 hours, a rarity among hotels. 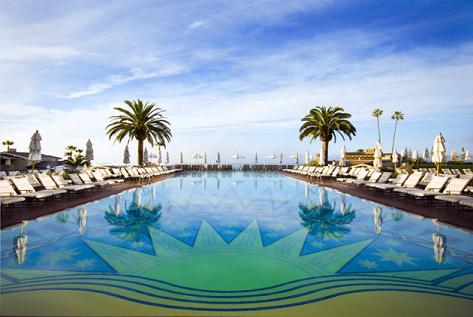 This exclusive resort occupies an enviable position on one of California’s most beautiful stretches of coastline. As if guests didn’t have enough to look at—rock outcroppings on an emerald ocean, the colorful subtropical gardens, the lines of the resort’s Craftsman design—the Montage has as its centerpiece the infinity edge Mosaic Pool. It’s the only commercial pool in the state of California with an ornate bottom. How ornate? In a nod to the town’s artistic heritage, the pool’s sunburst and undulating waves were created from over 100,000 one-square-foot tiles, in shades of blue, yellow, and white. Canary Island palms command each corner, and tasteful hedges border discreet cabanas. 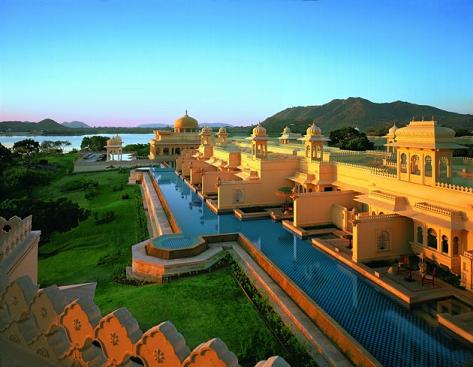 In steamy Rajasthan, a pool may seem like a mirage of luxury. But this much-photographed resort, which is reached via boat ride across Lake Pichola, is literally surrounded by one. If you choose one of the highest-end Premier Rooms that encircle the palatial property, you’ll feel like a raja when you open your doors to take a semi-private swim (suites with private pools are also available). Premier Lakeview Suites feature semi-private access to the hotel’s checkerboard-tiled main pool (88 by 81 feet), which is set in a local-style grand courtyard—plus the spa boasts its own lakeside pool.

This sprawling resort’s DoublePool Villas were always the resort’s most exclusive accommodations, but now the 24 butler-serviced, freestanding structures comprise their own resort-within-the-resort. Why double, you ask? Well, each villa’s expansive garden contains a full-length lap pool, shimmering with electric blue tiles and illuminated with mood lights at night. At one end of each 50-foot-long pool you’ll find an elevated, glass-walled Jacuzzi. And in How-did-they-think-of-this? touch, each villa’s glass-enclosed bedroom sits on a pedestal above a second, shallower wading pool that’s just steps away from the bed. The DoublePool Villas are available in both one- and two-bedroom floorplans.

This entry was posted in General and tagged Architecture, Design, Swimming, Travel. Bookmark the permalink.