After my friend Zoona had posted this picture on instagram, I googled the news piece for more info 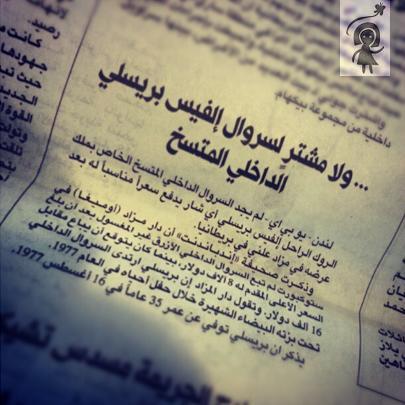 I came across this article in The Independent

Screaming fans might once have thrown their knickers at him, but the appeal of the King of Pop Elvis Presley isn’t quite as enduring as expected judging by the failure of his soiled undies to sell at auction.

The light blue briefs, unwashed and slightly stained in the crotch area, were expected to fetch £10,000 at Omega Auctions in Stockport over the weekend. But despite attracting bids of £5,000, no buyer was prepared to meet the reserve price of £7,000.

The underpants had attracted considerable interest prior to the auction because they were worn by Presley under one of his famous while jumpsuits during a 1977 concert.

The underpants were on sale among 100 other items of Elvis memorabilia auctioned to mark 35 years since his death.

This entry was posted in General and tagged Celebrities, News. Bookmark the permalink.